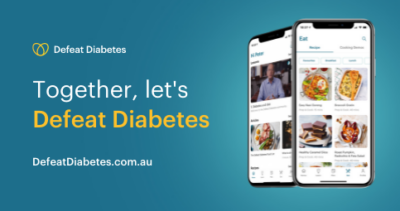 There is growing evidence that a low carb approach to managing type 2 diabetes, such as Australia’s     Defeat Diabetes Program, founded by Dr Peter Brukner, can reduce people’s risk of developing the condition and help put it into remission.

What do we mean by remission?

There’s been much debate over the years whether type 2 diabetes can be reversed or put into remission, partly because there was no universally agreed definition of what ‘remission’ looks like until recently.

In August 2021, a new international report1 agreed that type 2 diabetes could be put into remission and provided a global definition of the term.

The report suggests that people with type 2 diabetes be considered in remission if they achieve an HbA1c level of less than 6.5% for three months without the need for medication.

Our blood glucose and insulin respond differently to different macronutrients. Fat has minimal impact, protein has moderate, and carbohydrates can have a high impact on postprandial serum glucose and insulin. Clinicians have been taking advantage of this understanding for over a century, recommending low carbohydrate diets to manage diabetes well before insulin or medications were available.2

Since the discovery of insulin in 1921, people who experience a progressive loss of adequate β-cell insulin secretion on the back of insulin resistance have been advised to inject themselves with insulin and titrate according to amounts of carbohydrates consumed. This direct relationship between dietary carbohydrates and postprandial serum glucose led to the development of medications that lower blood glucose levels and improve insulin sensitivity.

This downstream, medication-based approach to type 2 diabetes may mean that individuals will need to take medication for the rest of their lives (and experience the costs and potential side effects). So instead, we need to look upstream and address one of the root causes of diabetes, starting with diet.

Can diabetes programs be delivered online?

In recent years, highly effective and digitally delivered programs in the UK and US are complimenting traditional approaches to diabetes care.

A recent UK study reviewed results from over 450,000 participants of the Low Carb program on diabetes.co.uk. Of the 743 participants in the study with a starting HbA1c above the threshold of 6.5%, 26% reduced their HbA1c to below 6.5%  while taking no glucose-lowering medications or just metformin.7 While longer-term studies are required to assess the program’s efficacy over a prolonged period, the initial results are promising.

Virta Health’s remote care model of low carbohydrate diets for type 2 diabetes has produced similar results in the US. Virta Health has published data annually, with the latest research showing results after two and 3.5 years. The two year results demonstrated use of any glucose-lowering medication (excluding metformin) among participants declined (from 55.7% to 26.8%), including insulin (-62%) and sulfonylureas (-100%). 17.6% of participants in the treatment group were found to be in remission.8

After 3.5 years, 71.4% of diabetes medications other than metformin were discontinued. 45.5% of participants achieved HbA1c <6.5% with either no medication (52%) or only metformin (48%). Again, longer-term studies are required.9

Defeat Diabetes is Australia’s first doctor and dietitian-led program that provides a path to remission for those diagnosed with pre-diabetes and type 2 diabetes. The program offers education from medical practitioners, video masterclasses, cooking demonstrations, recipes, and meal plans to improve the health of its members through a low carb lifestyle.

Developed by Dr Peter Brukner OAM, the Defeat Diabetes Program has already seen significant success, with 63% of members putting their type 2 diabetes into remission after three months on the program and 80% experiencing significant weight loss.

Claim your complimentary access to the Defeat Diabetes Program

Reducing carbohydrate intake is one approach to improve blood glucose levels. If you’re interested in learning more about Defeat Diabetes:

Experience the Defeat Diabetes Program for 12 months free of charge by visiting www.defeatdiabetes.com.au/register and entering the code ADEA2021.

This article is a paid advertorial.

Diabetic ketoacidosis (DKA) is a severe and life-threatening complication of Type 1 Diabetes (T1D).  A recent review of...