An Endurance Cyclist with Type 1 Diabetes

Nicole has worked in the field of Diabetes since the beginning of her dietetics career in various clinical settings and across NZ, UK, Cyprus and Australia. She enjoys helping people to manage different ages, life stages and activities WITH diabetes. She is an Accredited Sports Dietitian with Sports Dietitians Australia. 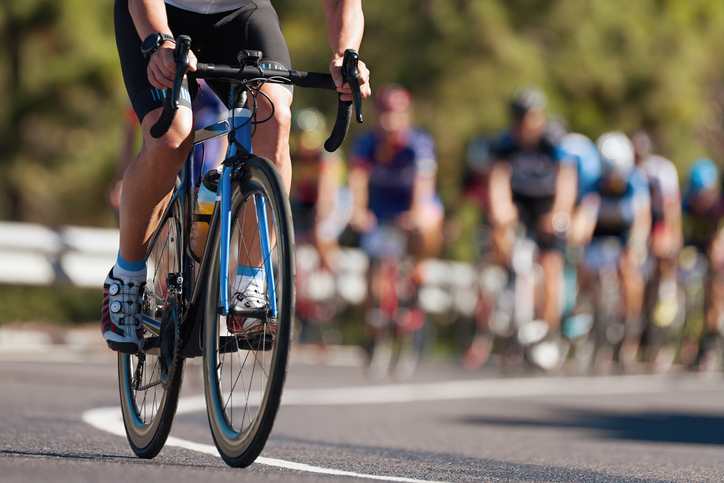 Type 1 diabetes (T1D) is a challenging condition to manage while exercising and requires a careful combination of self-management tools and awareness in order to manage safely and to perform in sport to a high level. Exercise physiology and metabolism varies for different modes of exercise and individuals respond uniquely, making it difficult to generalise advice to all athletes or people with T1D.

Exercise or muscle contraction activates GLUT4 receptors, stimulating greater uptake of glucose into active muscle from the bloodstream independent of insulin1,2. When blood glucose levels (BGLs) drop, insulin reduces and glucagon secretion increases, which subsequently increases glucose release into the blood from the liver glycogen stores and stimulates glycolysis in the muscles2. Some insulin is required to stimulate adequate uptake of glucose into the muscle, yet without diabetes, during exercise insulin is significantly reduced and delicately balanced by glucagon and other regulatory pathways2. In people with T1D insulin is administered exogenously, therefore the body is unable to counter regulate the drop in BGL during exercise1,2. Without intervention, this will often result in hypoglycaemia during exercise1,2. After exercise, GLUT4 and glucose uptake into muscles remains high to replenish the muscle glycogen used for that exercise1. Consequently, insulin sensitivity and risk of hypoglycaemia also remain high for a period of time after exercise1. The opposite effect, or a rise in BGLs, can also be experienced with T1D and exercise1,2. Performing high intensity exercise or experiencing different emotions during sport can raise stress hormones such as cortisol, adrenaline and nor-adrenaline which further stimulate glucose production by releasing glucagon and glycogen stores rapidly for a “fight or flight” response2. Specific examples may include when the athlete or person with T1D is nervous, stressed, excited or in pain due to the competition setting, injury, or the high intensity demands of that sport1. Some sporting examples that might raise these stress hormones include but are not limited to: boxing, downhill mountain biking, climbing, weightlifting or some team sports1.

In order to manage BGLs to exercise safely and optimise performance the person with T1D may need to1:

Sports nutrition principles vary depending on the person’s body weight, goals and exercise modality. For endurance athletes carbohydrates are the primary source of fuel for exercise especially as the intensity increases3. Muscle glycogen stores become depleted after approximately 60-90 minutes of exercise, necessitating ingestion of additional carbohydrate during events longer than this period to maintain carbohydrate availability3. To optimise performance, intakes of at least 1g/kg body weight/hr of carbohydrate are recommended and amounts upwards of this can provide further benefits as tolerated3.  The primary goal for maximising performance for someone with T1D is firstly optimising glycaemic management including preventing both hyper and hypoglycaemia and secondly maximising fuel availability with sports nutrition in their chosen sport 1.

Details of person with diabetes

Person: 33 year-old male, lives with wife and works in IT.

Sport: A/B-Grade level cyclist racing predominantly in criterium races. His goal was to consistently compete in A-grade and become more competitive amongst top level cyclists in the region.

Criterium cycling races are 60-75 minutes duration and cyclists ride in a tight bunch sharing turns on the front going as fast as possible, then slipping back in the group to draft off one another. There are many tactics to position well and there is always a sprint finish at the end. Criteriums are raced most weekends and for this athlete usually involve a 1 hour ride to criterium, 15-30mins wait, 1-1.5 hour criterium at high intensity, then 1 hour easy ride home.

Diabetes: T1D using multiple daily injections (MDI) of Levemir and Novorapid with carbohydrate counting. Capillary blood glucose monitoring only. Averse to CGM / Flash Glucose Monitoring due to disliking the idea of having something attached to the body

Specific Concerns: Not sure what to eat before or during races to manage BGLs. Just tries to run “high” by drinking sports drinks, resulting in raised BGLs during and after racing and training. He avoided eating during long training sessions and was finding himself “bonking”. “Bonking” or “hitting the wall” are terms used by athletes to describe the feeling of sudden exhaustion caused by inadequate nutrition.

Diet: Vegan diet for 3 years. Eating suitable plant proteins with meals, regular snacks and overall supports his day-to-day training nutrition reasonably well. He has tended to undereat when he increased his training volume as he is body weight conscious for cycling performance. Takes B12 orally. Some body image concerns, driven by weight, resulting in a reluctance to fuel appropriately.

We discussed that the ideal BGL target for sporting performance is 5.6-10 mmol/L and that this is often the limiting factor for performance and therefore is the most important goal1. If BGLs are above target, for example 14mmol/L while riding, there may be insufficient insulin on board to facilitate glucose transport into the muscle cells1, 2. If the athlete has a hypo during exercise and needs to stop and treat it, this will increase time to complete the event or race. Even if sports nutrition goals are met, if BGLs are out of target, performance is negatively affected and usually this would cost the athlete greater (in time and speed). We also decided to keep a diary to help him understand how his body reacts to different forms of cycling, training and racing.

As a close secondary goal, we aimed to increase carbohydrate intake during exercise to approx. 60-75g per hour for races of 75-90min duration or longer3. The body has a capacity to absorb glucose at approximately 60g/hr on average3. This can be increased with gut training or by utilising different types of carbohydrate such as fructose3. Training did not always require optimal nutrition due to lower intensities therefore encouraged 30-60g carbohydrates per hour on long training sessions (over 90 minutes in duration)3. For longer training rides, intensity and high BGLs were less of an issue therefore a different approach was required. Additionally, we optimised pre-exercise and post-exercise fuelling for training and performance.  We planned to practise race day nutrition in targeted training sessions and less important races. I encouraged him to trial these different strategies and not to be disheartened if it didn’t work the first time.  We also had a discussion around the key outcome being performance rather than weight. Working together we decided he was likely already at an optimal performance weight and that it would be more beneficial to work on nutrition and BGL management strategies for performance improvement.

Specific strategies are shown in Table 1 and discussed further in this article below.

Table 1. Nutrition intervention for management of T1D with different modes of cycling.

Cycling is typically considered an endurance sport but within a race or between different types of racing or training there are many variables that affect BGLs in different ways1.

One difficult part was planning for nerves or race intensity as even a practice event does not carry the same impact. This client experienced a significant rise in BGLs prior to an event which was managed with a pre-race snack with a small amount of insulin. We initially used a very cautious dose to avoid hypoglycaemia and worked our way up depending on the result. The athlete needed to practice race day situations as much as possible as each race day was different.

Changing BGLs were difficult to manage and adapt to during the race itself. This is an example where technology would be very helpful to manage diabetes during exercise. Cyclists who wear CGM technology can have their glucose levels displayed on their Garmin screen or can view their CGM reader/phone during cycling allowing them to adjust their nutrition strategy along the way to optimise BGLs for performance and safety.

Another difficulty to overcome with this athlete was his fear of increasing weight when fueling appropriately, due to eating more during cycling and in recovery to support increased training load. Cyclists are at increased risk of disordered eating and it is important to consider this in some sports, particularly if the person mentions losing weight as a top priority over performance4. He initially found it difficult to eat on the bike due to gut upset and was worried about hyperglycaemia with so much food. It is important to slowly increase tolerance with gut training3 and we found 30-50g eaten regularly during training helped him to manage larger quantities during racing. He found managing BGLs was easier with a combination of eating on the bike and having some insulin on board from breakfast.

It is important for health professionals working with athletes to thoroughly understand the sport they are competing in. If you are not familiar with the sport then research it or ask as many questions as possible to gain a better understanding. Where possible, consider a referral to an Accredited Sports Dietitian with experience in T1D or a dual qualified APD CDE with experience in Sports Nutrition.

Important considerations for the person with T1D and their healthcare team are understanding what BGLs may do, what opportunity they will have for breaks, diabetes monitoring, sports nutrition, and the likely race or training environment.  However, the most important thing for any athlete, but particularly the athlete with T1D, is to trial strategies in training, experiment many times and practice in a race environment.

Expect your athlete to be very individual in their response to exercise and for different sports, training or racing. This will allow both the health professionals and the athlete to adapt quickly to each situation and think outside the box. Empower your athlete to self-manage their diabetes in sport, undertake informed experiments to find what works and encourage them to be kind to themselves with every outcome.

Adults with intellectual disabilities are two to three times more likely to develop diabetes 1. However, there are limited diabetes-specific...

Managing diabetes during and after disasters – updated resources

No matter where someone lives in Australia, severe weather events and natural disasters can happen anytime—especially in summer. Whether it’s a...