Jason is a paediatric endocrinologist and is the chair of the Type 1 Working Group as part of the Statewide Diabetes Clinical Network. Jason is the project lead for the Diabetes, Know the signs, Ask campaign, aimed at reducing the rate of DKA at first presentation of Type 1 Diabetes. 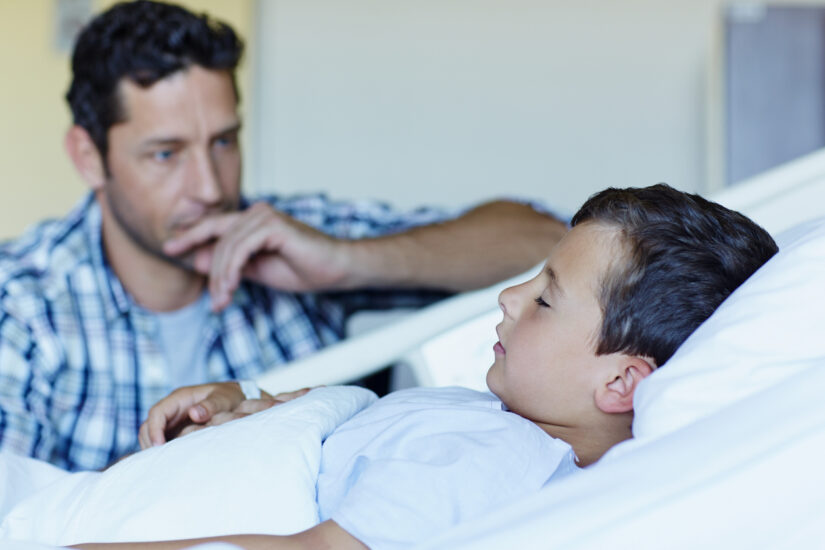 Over the past decade, there has been a steady rise in the DKA rate at first diagnosis of T1D.2,3,4  A recent review of diabetes services across Queensland revealed the rate had climbed to 47% for the state.1  There were some pockets where the rate was closer to 100%.1   A review of both national and international literature suggests the rising prevalence of DKA at first diagnosis of T1D is a worldwide problem.3,4,7,8,9  The project team investigated two main areas for intervention – primary care and community knowledge.  Several studies had highlighted the delays in diagnosis at a primary care level due to either misdiagnosis of a more common childhood illness or lack of recognition of any of the signs and symptoms.10,11,12  The Queensland GP liaison officer (GPLO) network, the Royal Australasian College of General Practitioners (RACGP) and primary care networks (PHN) were important collaborators to help understand the drivers for delays in diagnosis and design solutions.

Unfortunately, there were no published reports of community knowledge of the signs and symptoms of hyperglycaemia and so the project team surveyed 100 random anonymous parents through Playgroups Queensland.(Figure 1)  The survey asked parents to choose four symptoms from a list of eleven that they would seek urgent medical attention for.  The results revealed a low level of concern for the most common of the 4Ts – Thirsty and Toilet.14 Overall, the project team concluded that there was a low level of community knowledge of the 4Ts and low index of suspicion for diabetes in children at a primary care level. 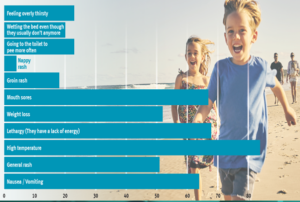 There are compelling reasons for reducing the rate of DKA at first presentation of T1D. These reasons can be broken down into three key parts – short, medium- and long-term consequences of DKA at diagnosis.  In the short-term, the overall mortality rate of DKA in children is less than 1%.15 Cerebral oedema is a significant and severe complication of DKA and has far worse outcomes for affected children.16,17  The mortality rate for cerebral oedema is up to 35%, however neurological morbidity in this cohort is as high as 40%.17  Other short-term impacts include increased hospital length of stay, trauma for both child and family and iatrogenic complications such as venous thrombosis from central venous catheter insertion.  In this age of dwindling health budgets, an increased cost of high dependency as compared to the general ward environment must also be considered.

In the medium term, there is evolving research in neurocognitive outcomes for children presenting in DKA at first diagnosis of T1D.  Studies have indicated a reduction in neurocognitive function out to 4-6 months from diagnosis independent of glycaemic management for those presenting in DKA at first diagnosis.18,19 More research in this space is required to understand whether this decline is temporary or permanent.

In the long-term, there is robust evidence to suggest that DKA at first diagnosis leads to poorer outcomes and increased complication rates than non DKA peers.20,21

A co-design methodology was utilised to design solutions that could target both primary care clinicians and community members.  A collaborative multi-disciplinary stakeholder group was consulted at all stages of the solution design. Consumers were engaged at the start with respect both to understanding the barriers to early diagnosis and the likely successful intervention strategies. The unexpected outcome was that due to this co-design process, the project was able to be implemented at no additional cost due to the widespread commitment of the stakeholder group. As stated, the GPLO networks and PHN were instrumental in designing the messaging for primary care clinicians and the mode to deliver it. Health pathways in a web-based platform used in Queensland for GPs to streamline referrals, ensuring the correct investigations have been undertaken to allow for expedited review with the correct specialist.

The diabetes health pathway was updated to be simple and clear on the signs and symptoms of hyperglycaemia and the requirement for point of care finger prick blood glucose testing as the only test necessary.  Other diagnosis pages commonly associated with misdiagnosis such as urinary tract infection and gastroenteritis were updated with red flags to consider hyperglycaemia.  In collaboration with the RACGP, a clinical guideline was written for the early recognition of hyperglycaemia in children – this is published on the Clinical Excellence Queensland website.22   The child health manual was updated with key information for child health nurses on when to consider hyperglycaemia in the children they review.

Campaign posters and magnets were designed after consumer consultation.  One was designed for clinicians and highlighted the 4Ts with the need for finger prick testing.  Another was consumer-facing, highlighting the importance of early medical review for any of the 4T signs.

Most Queensland Health Hospitals and Health Services displayed the social media campaign materials on world Diabetes Day (November 14th 2020), as did key organisations such as Diabetes Australia and JDRF.

Multiple community groups were engaged in the co-design process and were instrumental in the implementation. Playgroups Queensland shared the materials through social media and web-based platforms and were instrumental in the survey of community knowledge. The education sector was well represented through Queensland Department of Education, Queensland Catholic Education and Independent Schools Queensland.  They distributed the campaign material in local schools, tea rooms and through newsletters to increase community awareness of the 4Ts. Lions club Australia and Queensland Country Women’s Association also shared campaign materials in local club houses and on social media.

Evaluation of the success of the campaign is currently underway, although a lack of centralised data in Queensland has become the burden of tracking DKA rates. Anecdotally, members of Queensland Department of Education noted the success of the posters. There were some case stories of early diagnosis due to the prompt recognition from the teachers after seeing the posters placed in tea rooms and offices.   Once outcomes are confirmed and collated, an update will be provided to all stakeholders.  The recently released Australian National Diabetes Strategy 2021-2030 has highlighted early recognition of Type 1 Diabetes as goal 2 in the strategy.23  The ‘Diabetes, Know the signs, Ask’ campaign was designed to be rolled out widely and ongoing partnership with key stakeholders will be important to achieving this goal. 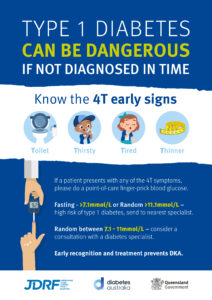 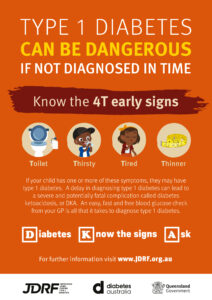 The rate of DKA at first diagnosis of T1D is unacceptably high.  Based on the literature, a significant percentage of DKA presentations are preventable through community education and early primary care recognition of the signs and symptoms of hyperglycaemia.5,6  There are short, medium- and long-term implications of DKA for children living with diabetes.15-21  The ‘Diabetes, Know the signs, Ask’ campaign designed a suite of campaign resources including posters/magnets, clinical guidelines, health pathways and social media tiles aimed at increasing the level of awareness of the signs and symptoms of hyperglycaemia known as the 4Ts – Thirsty, Toilet, Thinner, Tired.  Early recognition of these signs should lead to immediate medical review, point of care finger prick blood glucose test and timely diagnosis and definitive.

Diabetes educators have a vital role in both advocacy and leadership in both their work setting and the wider community.  There are several ways that diabetes educators can become involved in this work.  Raising awareness of the 4Ts through parent groups, school-based health nurses and communication with primary care practice nurses will help spread the important message of early recognition.

The Pharmacy Guild of Australia

Usher-Smith JA, et al. Variation between countries in the frequency of diabetic ketoacidosis at first presentation of type 1 diabetes in children: a systematic review. Diabetologia 2012;55:2878â2894.

Usher-Smith J, et al. âLooking for the needle in the haystackâ: a qualitative study of the pathway to diagnosis of type1 diabetes in children. BMJ Open 2013,3:e004068.

Buckley B et al. Exploring parentsâ knowledge of prodromal high blood glucose symptoms prior to the diagnosis of type 1 diabetes in children. Journal of Children and Young Peopleâs Health 2020; 1(1):28-34