Michelle Robins has been working as a Credentialled Diabetes Educator for 25 years in services that have included tertiary hospitals and community health both in Victoria and Queensland.

She has worked on 40 diabetes-related committees and working parties, presented at national and international conferences, more than 100 workshops and seminars and contributed chapters to several books.

Michelle currently is employed as the Nurse Practitioner Diabetes at Northern Health and is member of the Deakin University Conjoint Academic staff.

She has produced several clinical guidelines and position statements for the Australian Diabetes Educators Association, and in 2010 received the Jan Baldwin Award to recognise and reward excellence in a holistic approach to diabetes education and care. 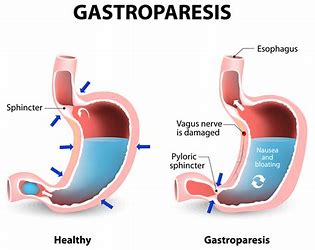 In 2017, GM was a 40 year old gentleman with a 18 year history of type 1 diabetes (T1D).  He returned home to live with his parents following the breakdown of his marriage and his deteriorating health.  His comorbidities included end-stage renal failure, right cerebellar haemorrhage secondary to hypertension, retinopathy, peripheral neuropathy, peripheral vascular disease, hypoglycaemia unawareness, gastroparesis and coeliac disease.

However, it was the diabetes-related complication of gastroparesis (also known as diabetic gastroparesis) that had become the most unpredictable challenge in his life, requiring changes to almost all aspects of his diabetes management.  GM’s diet, insulin regimen and strategies to reduce and treat hypoglycaemia were directly related to the marked delay in his gastric emptying.

Diabetic Gastroparesis (DG) is characterised by delayed gastric emptying in the absence of a mechanical obstruction and was first described by Rundles in 1945, and the term gastroparesis diabeticorum was coined by Kassander a decade later.1   The exact prevalence of DG is unknown.  In the T1D Exchange (more than 25,000 enrolled individuals over 67 US paediatric and adult clinics), clinic registry data reported 4.8% of people with T1D and 1.0% of people with type 2 diabetes had a diagnosis of DG.2

Type and severity of DG symptoms vary greatly and can include nausea, vomiting (particularly of undigested food), early satiety, postprandial fullness, bloating, abdominal pain and weight loss.  In a study of 146 people with DG, 92% reported nausea, 84% vomiting, 75% abdominal pain or discomfort and 60% early satiety.3  The severity of DG can range from symptoms that are relatively easy to control, where weight can be maintained with minimal dietary modifications, to moderate symptoms that are partially controlled with medication, dietary and lifestyle changes, to refractory symptoms that despite intensive medical therapy, require enteral nutrition with often frequent hospitalisations.4 In extreme cases bezoars (solid masses of food unable to be removed by the stomach) can form, requiring surgical intervention.

Outcomes of DG can be devastating.  These include weight loss, malnutrition, erratic blood glucose levels (BGLs), increased hypoglycaemic episodes that become harder to treat in a timely manner, and ketone production generated from starvation.  Studies have identified that people with DG experience a high burden of anxiety, depression and reduced quality of life.5

Diagnosis of delayed gastric emptying is generally established following a barium meal (scintigraphy), following a detailed assessment of symptoms.  Consideration must be given to the nature of the test meal: solids versus liquids, indigestible residue, fat content, calories and volume, all of which can impact gastric emptying time.4  Using a radiolabelled solid meal provides a physiological, non-invasive and quantitative measure of gastric emptying.  Using a liquid preparation is considered less sensitive as emptying duration and volume may be normal even with advanced disease.  A variety of foods are used as meals, including chicken, eggs, egg whites and cereal, since different foods are an important variable impacting the rate of gastric emptying.  Scans are performed at hourly intervals for up to four hours and a positive diagnosis can be made if more than 10% of the test food remains in the stomach.

Management of DG focuses on diet and nutrition support, medications, and emerging invasive procedures such as gastric electrical stimulation and surgery.6   The objective is to reduce symptoms and glucose variability and enhance a quality of life.  For GM a number of strategies were implemented, designed to achieve two key goals: increase gastric emptying and minimise severe hypoglycaemia.

Metoclopramide was taken prior to each meal.  The prokinetic activity is known to reduce nausea and vomiting in gastroparesis. Domperidone can also be used and is the preferred option for longer term use.7

GM’s diet not only needed to focus on his DG, it also needed to taking into consideration his coeliac disease.  Food and fluids consumed needed to assist in more rapid gastric emptying.  This meant choosing food and fluids that were low in saturated fats and fibre, and lacking acidity or added spices.8  The consistency of food can also influence gastric emptying and in some cases, soft or pureed meals maybe better tolerated.  A practical client information sheet produced by Queensland Health is available online to provide some cooking/preparation ideas.9  How a person eats can also impact gastric emptying – for example, more chewing allows saliva to mix more readily with a meal and aids digestion.

The types of carbohydrates recommended in the management of DG are generally the opposite of what was suggested for many people when they were first diagnosis with diabetes.   High glycaemic index (GI) rather than low GI foods will assist with gastric emptying and reduce the risk of post prandial hypoglycaemia.10.  Multiple small meals are preferred to fewer and larger meals.  Additional supplements may also be required to correct or prevent nutritional deficiencies.  In some cases, enteral feeding may be needed. Referral to a dietitian with experience in managing people with diabetes and gastroparesis is important.

Avoiding medications that can delay gastric emptying is also important. These include opiates, anticholinergics and calcium channel blockers. Alcohol, tobacco and caffeine can also affect gastric emptying and should be avoided or minimised.11

In terms of GM’s insulin regimen, rapid-acting analogue insulins could not be administered due to the very high risk of postprandial hypoglycaemia.  Instead, Actrapid was the preferred mealtime insulin due to its longer peak action.  Hyperglycaemic excursions also need to be minimised, as this too will slow gastric emptying.8 However, this aspect of management was not achieved due to concerns of GM’s hypo unawareness.

Unlike today, in 2017 there was no government funded scheme for continuous glucose monitoring (CGM).  At this time, the National Disability Insurance Scheme (NDIS) was in its infancy in terms of the types of services that could be provided for the person with diabetes.   Thus, in the absence of being able to afford CGM or flash glucose monitoring, GM’s mother FM undertook a direct and pivotal role in terms of monitoring her son.  She reminded and often took GM’s BGLs at very regular times across a 24 hour period.  Lucozade was consumed when BGLs were less than 6.0mmol/L.  When BGLs reached 3.5mmol/L, FM would administer intramuscular glucagon despite there being no changes in GM’s conscious state.  Over an intense period of review, it was identified that utilisation oral glucose treatment was insufficient to reverse GM’s hypos in a timely manner when BGLs were 3.5mmol/L or lower.

GM’s co-morbidities and very complex management needs was understandably an enormous burden to himself and his supportive parents.  To the exclusion of normal daily activities, reducing the episodes and severity of hypoglycaemia had become the key focus for GM, his family and the multidisciplinary team.  Much of this burden was resolved when GM became the successful recipient of a pancreatic/renal transplant.  His gastroparesis remains, however GM no longer requires insulin and the severity of his symptoms have reduced significantly.

When reviewing the literature pertaining to DG, much of the focus is on the pathophysiology of this condition rather than practical management strategies. Publications that do outline management strategies focus on ways to enhance quality of life, reduce risk for hypoglycaemia and bezoar formation, while maintaining nutritional status and include11, 13:

However, the American Diabetes Association (ADA) Standards of Medical Care in Diabetes – 2019 fails to list DG as a co-morbidity or as being important in the assessment of hypoglycaemia risk.14 Many of the strategies utilised for GM were developed and implemented using trial and error.  Given the access for subsidised CGM now available for an adult with severe hypoglycaemia unawareness on a healthcare card, some of this burden may be reduced.  The multidisciplinary team required to support a person with severe DG can be significant, coming from several different departments and health services, which can impact on communication within the team, client goals and outcomes.

A Nutritional therapy for the management of diabetic gastroparesis: clinic review. Diabetes, Metabolic Syndrome and Obesity: Targets and Therapy 2012;5:329-335.