Living with diabetesReviewTeaching tips
By
Dr Nisha Nangrani and 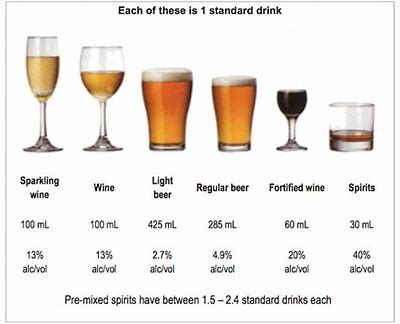 Alcohol is the most commonly used recreational drug in Australia and is consumed to varying degrees in a multitude of social and cultural settings. It is estimated that one-in-six people consume alcohol at levels that place them at lifetime risk of an alcohol-related disease or injury.1 The short-term and long-term consequences of alcohol use on physical, psychological and social well-being have been extensively researched and well-documented. However, in people with diabetes, the effects of alcohol may be amplified. Thus, it is imperative for clinicians and people with diabetes to understand the effect of alcohol on the progression and complications of the condition.

Diabetes affects over one in twenty Australians (1.2 million people) and has multi-system complications including cardiovascular disease, kidney disease, stroke, limb amputation, blindness and anxiety/depression, that can severely impact an individual’s quality of life.2,3 The total cost for Australians living with diabetes is in excess of $20 billion annually and poses a significant financial burden to individuals and the healthcare system.4

This article seeks to summarise the current state of knowledge regarding the pathophysiological mechanism of alcohol’s effects on glycaemic management; the impact of alcohol consumption on the management of diabetes and practical tips for managing alcohol use in people with diabetes.

Pathophysiological mechanisms between alcohol and diabetes

Numerous studies have investigated the mechanisms that underlie the effect of alcohol consumption on glycaemic control in people with diabetes. These effects differ substantially depending on whether alcohol consumption occurs during the ‘fed state’ (when the person has just eaten and BGLs are high) or in the ‘fasting state’ (when the person has not eaten for several hours or days and BGLs are low).

In the fed state (i.e. 4 hours post-eating), acute episodes of alcohol consumption do not lead to clinically significant changes in BGLs.6 Conversely, chronic alcohol use in well-nourished individuals with diabetes can result in long-term hyperglycaemia.7 This makes people with diabetes with long-term excessive use of alcohol more susceptible to the micro- and macrovascular complications of the condition.

In the fasting state (i.e. greater than 8 hours post-eating), alcohol consumption can result in profound hypoglycaemia which can have fatal consequences (coma or death) as there is insufficient glucose to maintain brain function.8 This is seen when alcohol is consumed for days without adequate dietary intake.

In the fasting state, the body has two major mechanisms for maintaining BGLs – 1) glycogenolysis or the breakdown of glycogen stored in the liver to produce glucose and 2) gluconeogenesis which is the synthesis and release of new glucose by the liver. Insufficient dietary intake can stop glycogenolysis after 1-2 days and the liver prioritises alcohol metabolism over gluconeogenesis, resulting in decreased glucose production and hypoglycaemia.

Alcohol consumption can also lead to hypoglycaemic unawareness where an individual is unable to recognise the symptoms of hypoglycaemia.9 In addition, alcohol often delays a return to normal BGLs.10

The combination of alcohol-induced hypoglycaemia, hypoglycaemic unawareness and delayed recovery from hypoglycaemia can lead to incontinence, inability to follow simple commands, disorientation and reduced cognitive function. In some cases, these changes may not be reversible.11

Impact of alcohol on diabetes management

In people without diabetes, numerous studies have demonstrated that low to moderate levels of alcohol consumption can be protective against developing T2D.12-13 However, in people with known diabetes, alcohol amplifies the complications of the condition.

A key component of diabetes management is lifestyle modification and maintaining a healthy body weight. Alcohol has very little nutritional value and is high in energy. As a result, consumption of alcohol in large amounts or on a regular basis can lead to weight gain, which can make achieving optimal glycaemic management challenging.14 Obesity is also an independent risk factor for developing other major co-morbidities such as cardiovascular disease.15

Chronic heavy alcohol use impairs insulin secretion and reduces insulin sensitivity, leading to impaired glucose tolerance.16 Furthermore, consuming alcohol around mealtimes not only increases the energy density of the meal but also stimulates appetite and food intake which can lead to hyperglycaemia.14 Alcohol-induced hypoglycaemia has been observed in people with and without diabetes, but is significantly more dangerous in the former group due to already impaired insulin regulation.

Long-term alcohol consumption has been associated with a greater incidence of short and long-term complications from diabetes.

Alcoholic ketoacidosis In people with diabetes, heavy alcohol consumption can precipitate alcoholic ketoacidosis (AKA), a condition characterised by extremely low insulin levels and excessive glucagon levels, resulting in the presence of ketone bodies in the blood. In AKA glucose levels are usually low to normal, compared to diabetic ketoacidosis (DKA) where they are usually significantly elevated.17 The metabolic acidosis can be made worse by repeated vomiting and dehydration. People suffering from AKA are usually lucid and alert despite the acidosis and marked ketonaemia, as compared to persons with DKA.18 Thus, clinicians treating people with diabetes with known heavy alcohol consumption should always be aware of the possibility of alcoholic ketoacidosis.

Retinopathy Alcohol is believed to exacerbate diabetic retinopathy by causing oxidative stress on the retinal tissue.29 The United Kingdom Prospective Diabetes study confirmed that alcohol consumption in men with diabetes was associated with more severe retinopathy compared to those who didn’t drink alcohol.30

Erectile dysfunction In men, erectile dysfunction is a known complication of diabetes that can be exacerbated by chronic alcohol use.31 While the mechanisms underlying this association require further investigation, it is suggested that lower than normal levels of the sex hormone testosterone are implicated.32 Alcohol is known to further lower testosterone levels.33

Alcohol interacts with numerous medications used to manage diabetes including:

Insulin: Heavy alcohol consumption in people who use insulin to manage their diabetes is associated with higher rates of severe hypoglycaemia and diabetic ketoacidosis.34

Sulfonylureas: Gliclazide (Diamicron), glibenclamide (Daonil) and chlorpropamide (Diabinese) have been known to induce long-periods of hypoglycaemia when taken in conjunction with alcohol. They also decrease the rate of ethanol elimination from the blood, resulting in a greater risk of alcohol toxicity.35

It is advisable that people with diabetes consult their doctor prior to consuming alcohol with medications in order to avoid any possible interactions.

A significant factor in effective diabetes management is an individual’s capacity and willingness to carry out self-management strategies such as exercising, smoking cessation, blood glucose monitoring, taking diabetes medications, following a healthy diet and being linked in with a supportive multidisciplinary diabetes team. Evidence indicates that there is an inverse relationship between excessive alcohol consumption and effective diabetes self-management.37 This relationship is thought to have a multi-factorial aetiology as alcohol consumption is associated with:

All of the above can lead to suboptimal glycaemic management and increase the risk of complications and disease progression.

How much alcohol is safe to drink?

Current guidelines suggest no more than two standard drinks per day for both men and women.41 This is the same for people with and without diabetes. A standard drink contains 10g of alcohol. This is equivalent to: 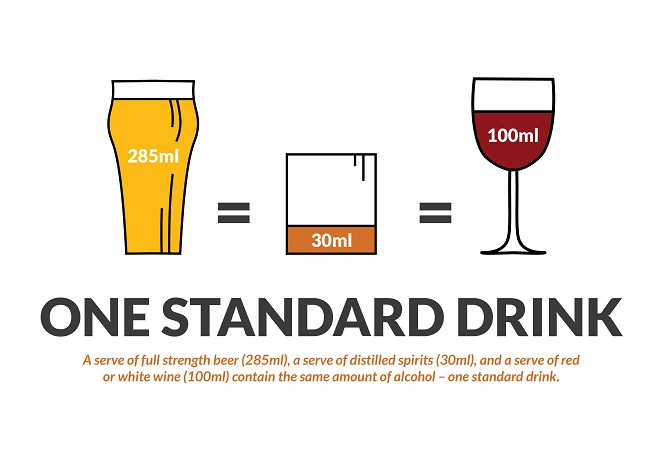 It is important to educate people with diabetes regarding safe levels of alcohol consumption as this can reduce both the rate of disease progression and the risk of further complications. Certain population-groups such as women who are pregnant or planning a pregnancy and those under the age of 18 are advised to abstain from alcohol consumption altogether.41

What types of alcohol should people with diabetes choose?

Beverages high in sugars such as soft-drink mixers, sweet liqueurs and pre-mixed alcoholic beverages are more likely to increase BGLs. Instead, it is preferable to choose low-alcohol beers or spirits with diet mixers. Low-carbohydrate beers offer no advantage over regular beers as they often have a higher alcohol content which can worsen overall diabetes management.

While alcohol can be safely consumed in moderation by many people with diabetes, it carries additional risks including hypoglycaemia and a higher risk of development and progression of complications. It is imperative that clinicians and people with diabetes are appropriately educated about safe levels of alcohol consumption and practical strategies to avoid alcohol-related harm.