Megan Paterson is an RN CDE and has worked as a paediatric diabetes educator for almost 15 years. Megan works with the paediatric diabetes team at the John Hunter Children’s hospital and is also undertaking a PhD looking at how dietary protein impacts on postprandial glucose in people living with Type 1 diabetes. 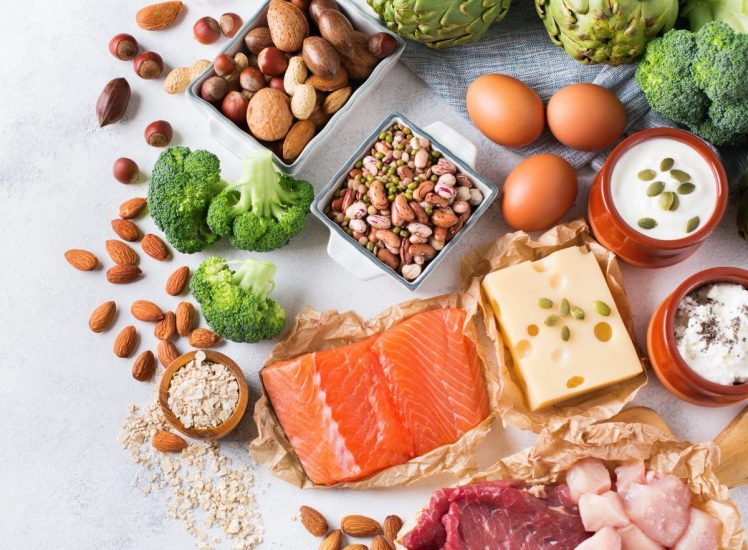 It is well known that optimal glycaemic management is essential in the prevention of acute and chronic complications of type 1 diabetes (T1D).  A primary focus of the management of T1D is to use intensive insulin therapy, where prandial insulin doses are matched with the pre-meal glucose level and the amount of carbohydrate being consumed in the meal.  While it is well established that carbohydrate is the main macronutrient to impact postprandial glycaemia, there is evidence that dietary fat and protein can also have a significant effect on blood glucose levels (BGLs). Our research group, affiliated with the John Hunter Children’s Hospital and Hunter Medical Research Institute, has conducted several studies looking at the glycaemic impact of both protein and fat. We found that fat and protein can independently impact upon BGLs and, when consumed together, the effect on postprandial glycaemia is additive1. This is important, as postprandial hyperglycaemia has been identified as an independent risk factor for the development of long-term complications of diabetes including cardiovascular disease, even when HbA1c is in target2.

The increased use of continuous glucose monitoring (CGM) has further highlighted the postprandial glycaemic effects of various meal types and indicates that current mealtime insulin dosing strategies are not always effective (Figure 1). There are now recommendations (ADA 2019 and ISPAD 2018) suggesting that for some people with T1D, it may be necessary to make adjustments to mealtime insulin doses in order to compensate for this and reduce the postprandial glycaemic excursions that can occur following high fat, high protein meals3, 4. Additionally, adjusting insulin for the fat and protein content of meals is an important clinical issue given that fat and protein usually make up 40-50% of daily energy intake (~30-35% for fat and 15-20% for protein)4 and while high protein and high fat diets are receiving a lot of attention and gaining popularity on social media and in the general population. 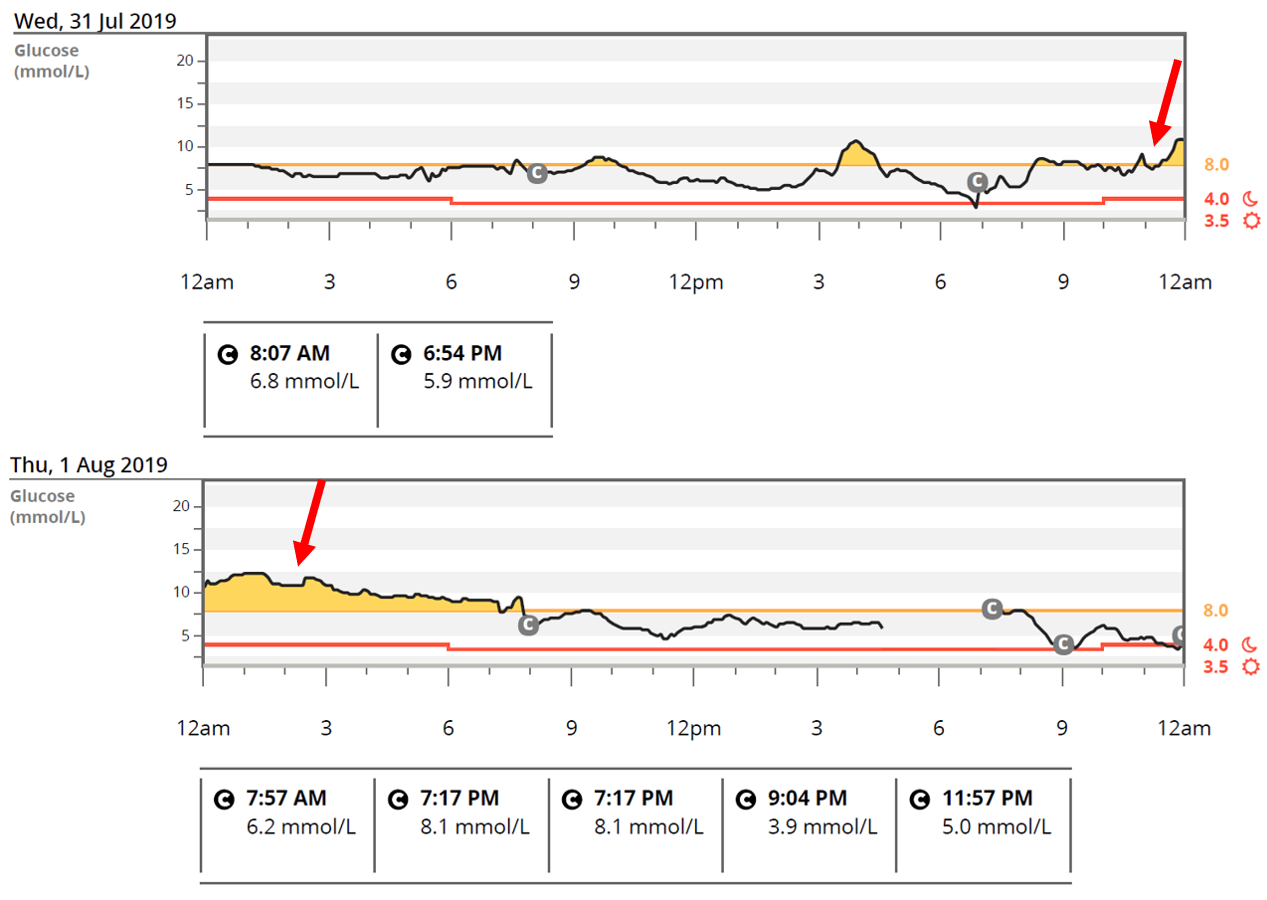 Getting started: What is the glycaemic impact of protein and fat?

Dietary protein and fat have been shown to cause delayed postprandial hyperglycaemia in people with T1D in the late (3-5hr) postprandial period and reduce the early postprandial rise (1-2 hr) compared to carbohydrate5-7.

Our team has conducted a sequence of studies in people using intensive insulin therapy looking at the glycaemic impact of protein alone (independent of carbohydrate and fat) and when consumed in a mixed meal. We demonstrated that when protein is consumed in isolation of carbohydrate and/or fat, a larger amount needs to be consumed before it has a significant impact on postprandial glycaemia compared with when it is consumed as part of a mixed meal.  We found that 75-100g of protein consumed alone (equivalent to a 300g lean steak with salad) produced a late (3-5 hours) glycaemic rise of 2-3 mmol/L, similar to that of 20g of glucose consumed without insulin6. In comparison, when protein was eaten as part of a mixed meal with 30g of carbohydrate (no fat), amounts as low as 12.5g up to 75g produced a significant glycaemic response. We also found a clear dose response from the protein test meals; as the amounts of protein increased, the postprandial glycaemic rise became higher, up to 5mmol/L greater at 5 hours7. Conversely, the addition of protein to a carbohydrate meal decreased the postprandial glucose level from 30 to 60 minutes after the meal.

Similar to dietary protein, fat has also been shown to dampen the early glycaemic rise and cause late sustained hyperglycaemia commencing at 3-5 hours after the meal8. Together with researchers at Sydney University and Joslin Diabetes Centre, we found meals high in fat and protein require more insulin to manage hyperglycaemia in the late postprandial period (3-6 hours after a meal) than lower fat and protein meals with the same carbohydrate content9. More recently, in a study with our Irish colleagues10 looking at fat (consumed without protein and carbohydrate), we found that fat eaten alone increases glucose levels at 5 hours in a dose-dependent manner.

While protein and fat have been shown to independently cause late postprandial glycaemic excursions, the effect is additive when they are consumed together1. This means additional insulin is needed if a meal high in both fat and protein is consumed compared to just protein or fat alone. Our studies tell us that we need to consider the overall macronutrient content of the meal when determining how much additional insulin is required.

Next steps: Adjusting insulin for protein and fat

In clinical practice there are two main methods used to calculate additional insulin for fat and protein meals; the Pankowska Equation and the Food Insulin Index, however both have been associated with high rates of hypoglycaemia11. Studies, including our own12-15, have investigated the extra insulin required for fat and protein and all have found that there are large individual differences in additional insulin needs. Wolpert et al found that a high fat meal (fat 60g) required on average 42% more insulin than a low fat meal (fat 10g) with some participants requiring more than twice as much insulin, while others required no extra insulin (-17%- 108%)8. Bell et al found that for a high fat, high protein meal (fat 44g, protein 36g) a mean dose increase of 65% was needed to manage hyperglycaemia16. In line with this, our group has recently reported that an additional 60% of the mealtime dose was needed to improve hyperglycaemia following a high fat, high protein meal (fat 40g, protein 50g)15.  For people using MDI, one study has shown that an extra 30% of the usual dose of rapid acting insulin may be appropriate for a high fat meal (fat 55g)17.

In practice, our study findings and clinical experience suggest that an additional 20% of the carbohydrate dose (based on insulin to carbohydrate ratio (ICR)) should be given as a conservative starting dose for high fat, high protein meals and increased in 10% increments up to 40%, with any adjustments based on 3hour and 6 hour post- meal blood glucose trends.

In people using insulin pumps, insulin for a high fat, high protein meal should be given in a dual wave bolus with additional insulin in a 60/40 or 70/30 split over 2-3 hours. In people using MDI our preliminary study findings suggest that doses up to 130% of the ICR can be given as a single injection before the meal without hypoglycaemia (Smith, personal communication).

Translation into clinical practice at the John Hunter Children’s Hospital

All families are now taught from diabetes onset that large amounts of fat and protein dampen the early glycaemic rise and cause delayed hyperglycaemia. Healthy eating with pre-prandial insulin and mealtime structure is encouraged, with an emphasis on vegetables, fruit, lean protein serves, wholegrains, healthy fats and dairy. We have found it helpful to develop resources for families that outline foods high in protein and fat that may require additional insulin (Figure 2). Families who identify problematic hyperglycaemia from high protein, high fat meals are counselled on alternative meal options and have their insulin doses reviewed to ensure their insulin to carbohydrate ratios and basal doses are optimised. 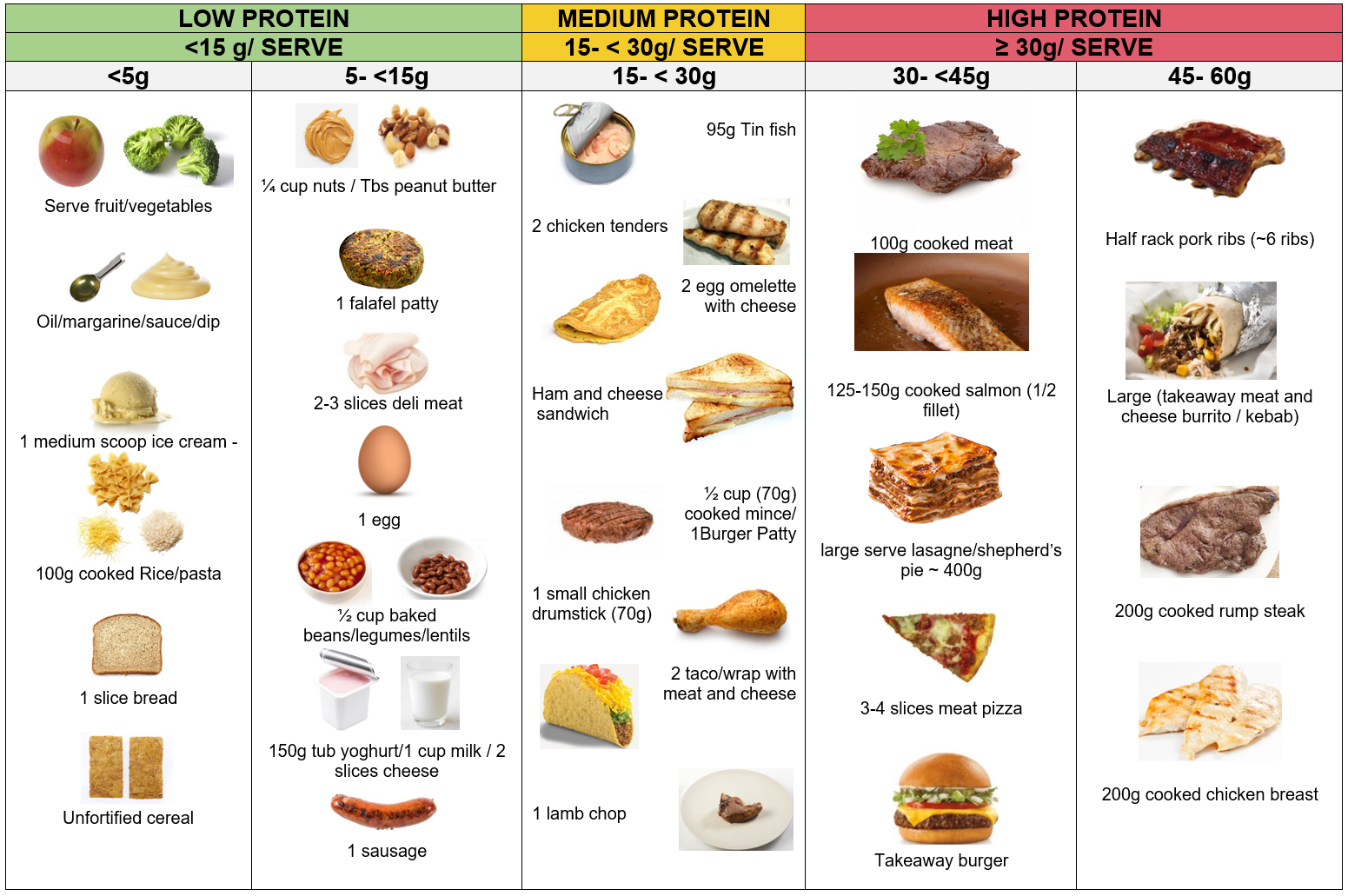 Individual insulin dose adjustments are recommended by initially increasing only the carbohydrate bolus by 20%. Then if needed, based on CGM profiles or blood glucose monitoring, the dose can be increased by 10% increments to a maximum of 40% additional insulin.  For those using EzyBicc, our team bolus insulin calculator card, we have developed a supplementary protein and fat card to automatically calculate the insulin dose for meals higher in protein and fat based on the individual ICR, the additional insulin for fat and protein and the correction factor (Figure 3). This entire dose is given pre-prandially, with families reporting adherence to this in a recent survey. For those on pump therapy, the total mealtime dose is advised to be administered as a combination bolus split of 70:30 over 2.5 hours. It is important the dose and insulin delivery is individually adjusted based on the blood glucose responses of the person with diabetes with input from the diabetes team. 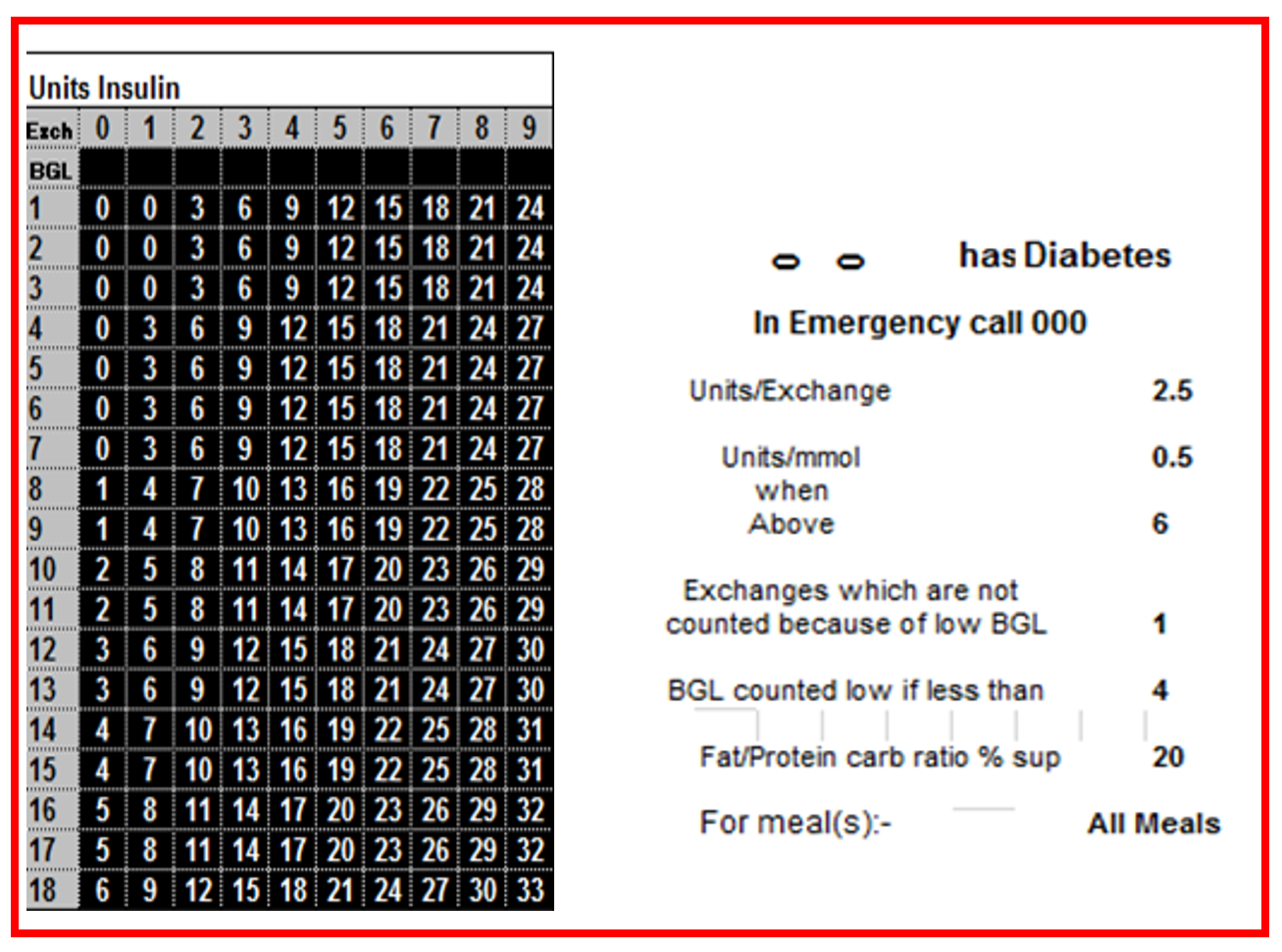 The addition of fat and protein to a carbohydrate meal initially lowers the peak glucose level and later, results in hyperglycaemia that can usually be seen from 3- 5 hours after the meal. To manage early peaks, families are encouraged to eat carbohydrate foods as part of a mixed meal which includes protein and small amounts of healthy fats. To manage the delayed hyperglycaemia associated with high protein and high fat meals the insulin dose may need to be increased, above what is required for carbohydrate, and the duration of insulin action extended using a combination bolus. At the John Hunter Children’s Hospital families are individually counselled on increasing the insulin dose in 10% increments based on the ICR and extending the delivery using a combination bolus over 2-3 hours.

There remains a need to provide targeted strategies to optimise insulin for meals. Our team are currently trialling OptimAAPP, a novel insulin dosing application to guide the complicated adjustments regarding insulin bolus amounts for foods of mixed macronutrient composition. As a team in partnership with our families, we believe diabetes education should evolve and be supported by world leading research to improve outcomes for people living with diabetes.

We would like to sincerely thank all the members of the John Hunter Children’s Hospital Diabetes team and members of the research team based at Hunter Medical Research Institute. We especially would like to thank the many families who have participated in our research and our collaborators from Australia and internationally.

OâConnell S, King BR, Smart CE, Shafat A. Is the glycaemic response from fat in meals dose-dependent in children and adolescents with T1DM on intensive insulin therapy? 57th Annual Meeting of the European Society of Paediatric Endocrinology, 27-29 September 2018, Athens, Greece.

Evans M, Smart CE, Keating B, et al. What is the quantity of additional insulin required for meals high in fat and protein? ADEA and ADS ASM Perth, WA September 2017