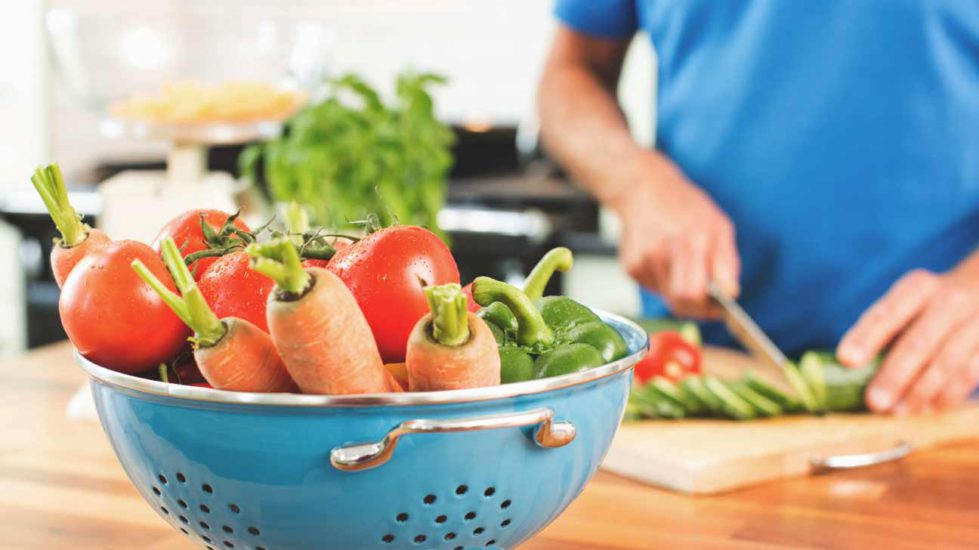 Plant-based diets are those that consist entirely or mostly of plant-based foods including fruit, vegetables, legumes, nuts, seeds and grains. While a number of different dietary patterns may be considered plant-based, this article will focus on vegan (devoid of animal products) and lacto-ovo vegetarian diets (which also include eggs and dairy products).  There is a growing body of evidence to suggest that a plant-based eating pattern has benefits for both the prevention and the management of type 2 diabetes (T2D).

Observational studies have shown that compared to non-vegetarians, those following a vegetarian or vegan diet have a significantly lower risk of T2D.  A 2017 systematic review and meta-analysis found a pooled odds ratio for diabetes in vegetarians vs. non-vegetarians of 0.73.1

In a subset of 15 200 men and 26 187 women without diabetes at baseline who were followed for two years, vegans were found to have a 62% lower risk of developing T2D and lacto-ovo vegetarians a 38% lower risk compared to non-vegetarians, after adjustment for confounding factors.4

Early studies of low-fat vegan diets in people with T2D demonstrated significant improvements in blood glucose levels and blood lipids, as well as considerable reductions in medication requirements, although some of these studies were small and did not include a control group.  However, a 2018 systematic review of nine randomised controlled trials (RCTs) found that, compared to control diets (including those of several diabetes associations), plant-based diets were associated with significant improvement in emotional well-being, physical well-being, depression, quality of life, general health, HbA1c levels, weight and total and LDL cholesterol levels.5

The largest RCT, involving 99 individuals with T2D, compared a low-fat vegan diet with a diet based on the American Diabetes Association (ADA) guidelines.  After 22 weeks, the vegan diet reduced HbA1c, weight, LDL cholesterol and urinary albumin levels significantly more than the ADA diet and 43% of subjects were able to reduce their medication compared to only 26% in the ADA group.6  Subjects were then followed up until 74 weeks  and while weight loss was no longer significantly different, the vegan diet group still had significantly greater reductions in HbA1c, total and LDL cholesterol (before any medication adjustment), and diabetes medication doses were reduced in 35% of the vegan diet group compared to 20% in the ADA group.7

It is well accepted that excess weight is a significant contributor to insulin resistance and T2D risk, and that weight loss is a key component of the management of T2D.  Despite the current popularity of lower carbohydrate, higher fat diets for weight loss, evidence suggests that plant-based diets (usually low in fat and higher in carbohydrate) are an effective approach to weight management.

Aside from the impact on weight, there are a number of possible explanations for the benefits of plant-based diets for diabetes prevention and management.  Compared to most western diets, vegetarian and vegan diets are generally higher in dietary fibre and are likely to include more wholegrains, legumes and nuts, all of which have been associated with a reduce risk of T2D.

There is also increasing evidence for the role of the gut microbiome in chronic disease risk.  Plant-based diets, due to their high content of dietary fibre and fermentable carbohydrates, may promote a more favourable gut microbial profile.11 For example, one study found that those following a vegan diet had a unique gut microbiota, with a reduced number of pathobionts, implicated in low grade inflammation, and a greater abundance of protective species.12

Concerns about acceptability are often cited as a barrier to individuals adopting a vegetarian or vegan diet and may be one reason why more health professionals are not recommending this type of eating plan, despite evidence of the benefits. However, this is not supported by research. In fact, several studies, including those discussed above, have found that low-fat vegetarian or vegan diets were well accepted, similar to acceptance levels standard low-fat diets.7, 17, 18

While concerns about meeting nutritional needs on a vegetarian diet are also often cited, well planned vegetarian diets, including vegan diets, have been shown to be nutritionally adequate and are appropriate for individuals during all stages of life.19 Some nutrients can be more difficult to obtain on a vegetarian diet, but careful planning, and in some cases the use of fortified foods or supplements, can ensure that an individual’s nutrition needs are met while maximising the health benefits of a vegetarian or vegan diet.20 Those following a vegan diet will need to ensure a reliable source of vitamin B12 from supplements or fortified foods, and this is particularly important for those on metformin, which can reduce vitamin B12 absorption.21

Plant-based diets don’t just benefit diabetes and weight management.  Dietary patterns which are rich in plant foods and low in animal foods (particularly red meat) have repeatedly been associated with a reduction in risk of other chronic conditions including cardiovascular disease and some types of cancer.22, 23 These include vegetarian and vegan diets, Mediterranean diets and the Dietary Approaches to Stop Hypertension (DASH) diet.

Compared with omnivorous diets, vegetarian and vegan diets have been shown to reduce the risk of developing T2D, appear more effective for improving glycaemic management and reducing medication needs than traditional diabetes dietary advice, and can assist with cardiovascular health and weight management.  These diets are generally well accepted, can meet nutritional needs, and may more closely match our current dietary recommendations.  For those not willing to make the change to a vegetarian diet, reducing intake of red and processed meats and increasing the intake of plant foods may still have significant benefits for the prevention and management of diabetes.

To learn more about plant-based diets and diabetes, the following (free to access) papers may be helpful:

McMacken et al, 2017. A plant-based diet for the prevention and treatment of type 2 diabetes

Toumpanakis et al, 2018. Effectiveness of plant-based diets in promoting well-being in the management of type 2 diabetes: a systematic review.

Diabetes Medications can cause Urinary or Faecal Incontinence

For those with diabetes and impaired vision, monitoring blood glucose levels can be challenging. The CareSens N Voice meter, with its talking function,...

Changes to certification of NDSS forms from 1 August 2020

The Department of Health has undertaken a project to deliver updated NDSS IT systems and simplified business processes to reduce administrative time and...