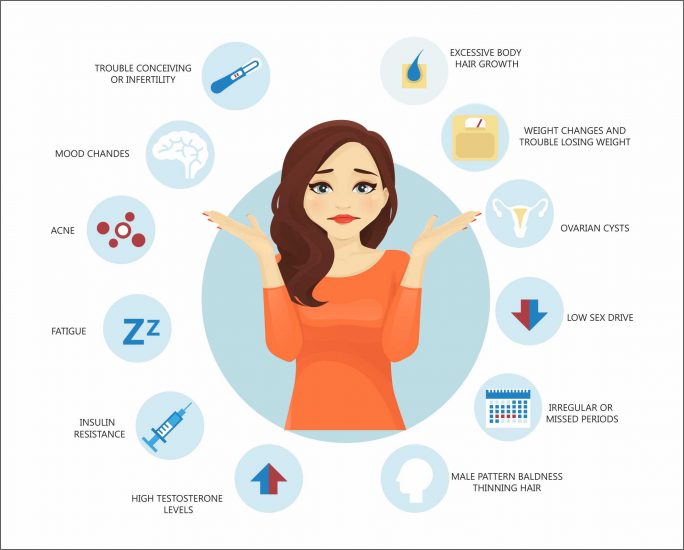 Polycystic Ovary Syndrome (PCOS) is the most common endocrine disorder in women, affecting an estimated 8-13% of women of reproductive age.1 The prevalence in Indigenous women in Australia has been found to be significantly higher than in non-Indigenous women (around 21%).2 Once thought of as just a fertility problem, it is now known that PCOS is a metabolic disorder with serious health consequences.

The common features of PCOS are extensive and include:3, 4

Women with PCOS are also more likely to be overweight or obese, and carrying excess weight worsens metabolic and reproductive features.5, 6

Diagnosis is usually made using the 2002 Rotterdam criteria which require the presence of two out of three of the following (with the exclusion of other aetiologies such as congenital adrenal hyperplasia, androgen-secreting tumours and Cushing’s syndrome):

The cause of PCOS remains unknown but is likely to result from a combination of genetic,  environmental (including the in-utero environment) and lifestyle factors.7

In 2018 the first international evidence-based guideline for the diagnosis and management of polycystic ovary syndrome (PCOS) was developed.8  The development process involved an Australian-led international and multidisciplinary collaboration of health professionals and consumers. The guideline is approved by the National Health and Medical Research Council (NHMRC) and aims to support both health professionals and women with PCOS in improving care, health outcomes and quality of life.  The recommendations from the guideline will be discussed throughout the remainder of this article.

The 2018 International evidence-based guideline for the assessment and management of polycystic ovary syndrome recommends regular screening for diabetes, as follows:11

While traditionally associated with insulin resistance and T2D, there is also evidence to suggest a higher prevalence of PCOS in women with type 1 diabetes (T1D). In fact, a 2016 systematic review and meta-analysis found a pooled prevalence of 24% in adolescent and adult women with T1D, significantly higher than in women without diabetes.12  The mechanisms are still unclear but it has been hypothesised that exogenous hyperinsulinism, resulting from the administration of large doses of subcutaneous insulin needed to reach the portal circulation in T1D, may lead to increased androgen production.12 Further research is needed to identify the pathophysiological mechanisms underlying PCOS and to address the long-term consequences of PCOS in women with T1D.12

Women with PCOS are more likely to be overweight or obese, particularly in regard to central obesity, and there is evidence that rates of weight gain are greater than in the general population.6, 13  Excess weight worsens reproductive, metabolic and psychological features of the condition.5 It is also a significant concern for women themselves.

While women with PCOS often report difficulties losing weight, a recent systematic review of weight loss interventions found no differences in weight loss between women with or without PCOS.14  This is an important message, as a recent US study found that women with PCOS had a greater perceived susceptibility for disease and weight gain and poorer perceived control over these health outcomes.15 They were also less likely to agree that a healthy diet or physical activity could reduce risk of weight gain compared to women without PCOS.15 Helping women to understand the benefits of lifestyle modification, even with quite modest weight loss (5-10% of weight), may increase their self-efficacy and motivation to make lifestyle changes.

Management of PCOS aims to:

Lifestyle modification, including diet, exercise and weight management, is recommended as the first line of treatment and has been shown to improve body composition, hyperandrogenism and insulin resistance and reduce metabolic risk factors.11, 16–18  While some women may also require pharmacological treatments, these are recommended to be prescribed alongside lifestyle changes.8

Despite the important role of diet, long-term, well controlled studies investigating different dietary approaches in women with PCOS are lacking.8  While dietary interventions resulting in weight loss have shown benefits, there is currently insufficient evidence to support one specific type of diet over another for women with PCOS.8  For this reason, general healthy eating recommendations should be encouraged, focused on weight loss in those who are overweight and on prevention of weight gain in those who are of a healthy weight.8  Similar to recommendations for people with diabetes, dietary changes should be tailored to food preferences, allowing for a flexible and individual approach to reducing energy intake and avoiding unduly restrictive and nutritionally unbalanced diets.

Several studies have reported a higher prevalence of body image concerns and disordered eating in women with PCOS and a recent meta-analysis of seven studies found that women with PCOS have more than three times the odds of having abnormal eating disorder scores or an eating disorder diagnosis19.  These findings highlight the importance of screening women with PCOS for disordered eating before recommending weight management interventions.  The international guideline emphasises the importance of health professionals being aware of the increased prevalence of body image dissatisfaction and disordered eating in these women and recommend screening for these conditions where suspected.8  Further assessment, referral and treatment, including psychological therapy, should be offered where indicated. The guideline provides initial questions to screen for body image dissatisfaction and disordered eating.

Referring women with PCOS to an Accredited Practising Dietitian (APD) for individualised dietary advice is recommended.

Alongside diet, physical activity plays an important role in the management of PCOS.  Regular exercise has been found to improve anthropometric and metabolic outcomes in women with PCOS although the impact on reproductive outcomes is unclear.20  Similar to diet, there is limited evidence for the benefits of specific types of exercise for women with PCOS, and recommendations are the same as those of the general population.8  This includes incorporating regular moderate-to-vigorous exercise, including muscle strengthening exercises, with the amount dependent on whether the goal is general health and prevention of weight gain, or weight loss and prevention of weight regain. Women are also encouraged to aim for at least 10000 steps per day, including activities of daily living, and to minimise sedentary, screen and sitting time.

Referral to an Accredited Exercise Physiologist (AEP) for individualised exercise advice is recommended.

Metformin is commonly being used in women with PCOS although its prescription for this purpose in Australia is off-label on a private prescription.  In combination with lifestyle modification, metformin has been found to improve body mass index, menstrual cyclicity, androgen levels and metabolic features.8

The international guideline recommends the use of metformin in women with PCOS who have IGT or T2D and those from high risk ethnic backgrounds.8  They also suggest considering metformin for women who are overweight (BMI > 25kg/m2), regardless of metabolic status to help with managing weight and metabolic outcomes where lifestyle modification hasn’t addressed metabolic features. However, it is recommended as an addition to lifestyle intervention, not as a substitute, and women  should be informed of the evidence for its use, the side effects and considerations with long-term use, including vitamin B12 deficiency.8

For women who are trying to conceive, the guideline recommends that metformin could be used alone in women with PCOS, with anovulatory infertility and no other infertility factors, to improve ovulation, pregnancy and live birth rates, although women should be informed that there are more effective ovulation induction agents.8

Other medications that may be used in women with PCOS, depending on their symptoms and goals of treatment, include the combined oral contraceptive pill (COCP; to help address menstrual cycle regularity and hyperandrogenism), anti-androgens (to help with hyperandrogenism if the COCP hasn’t been effective on its own) and anti-obesity medications, if appropriate.8  For women having difficulties conceiving, medications to induce ovulation may be used, including letrozole, clomiphene citrate (alone or in combination with metformin) and gonadotrophins.8  Where ovulation induction isn’t successful in achieving a pregnancy, laparoscopic ovarian drilling and in-vitro fertilisation (IVF) may be considered.8

PCOS is a common condition in women and it has significant health implications. Given the prevalence of PCOS, and the association with diabetes, it is important that credentialled diabetes educators (CDEs) are familiar with the condition and its management.  CDEs can also play an important role in increasing the awareness of PCOS among women with diabetes, including those with GDM.

Research has shown that women with PCOS want more information about PCOS and its management, including lifestyle management.21 It is therefore important that CDEs who might be seeing these women are informed of the evidence-based guidelines and are prepared to answer questions and provide the information and support that women need to help in managing their condition.  A range of evidence-based resources, including health professional practice tools, resources for women with PCOS and a copy of the guideline can be found at https://www.monash.edu/medicine/sphpm/mchri/pcos/resources

Changes to certification of NDSS forms from 1 August 2020

The Department of Health has undertaken a project to deliver updated NDSS IT systems and simplified business processes to reduce administrative time and...

Plant-based diets are those that consist entirely or mostly of plant-based foods including fruit, vegetables, legumes, nuts, seeds and grains. While a...

As we put this edition of the ADE together, it remains a challenging time for diabetes educators and the people with diabetes we care for.  I hope...