The Australian Centre of Behavioural Research in Diabetes, Diabetes Victoria

The Australian Centre of Behavioural Research in Diabetes, Diabetes Victoria

Eileen Collins, RN CDE has been working as a diabetes educator for 30 years. She works at Diabetes Victoria as the National Co-coordinator of the OzDAFNE program; an evidence based, structured self-management program for adults living with type 1 diabetes. Eileen also facilitates a nurse led diabetes clinic in general practice.

Foundation Director, The Australian Centre for Behavioural Research in Diabetes* 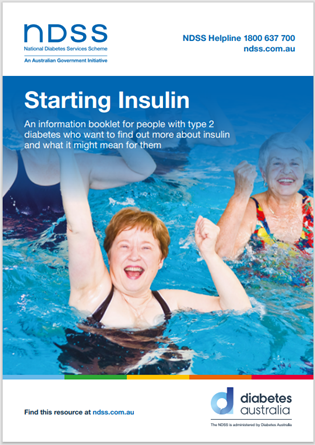 Long-term outcomes are improved, and complications are reduced among people with type 2 diabetes (T2D) when blood glucose levels are maintained within the target range.1, 2 However, considerable evidence demonstrates that at least 50% of people with T2D have glycaemic levels above the target range.3, 4 Further, treatment intensification, particularly for insulin therapy, is often delayed.5, 6 In addition to systemic and health professional barriers to timely insulin prescription, people with T2D commonly report myths, misconceptions and fears around starting insulin.6-8 This is known as ‘psychological insulin resistance’. It can impact both on timely insulin initiation and optimal use. For example, we previously identified that approximately 1 in 4 Australians with T2D, for whom insulin initiation was clinically indicated, report that they are ‘not at all’ willing to start insulin.9 Compared to those who are willing to initiate insulin, this group reports significantly greater negative beliefs about insulin.10 Importantly, they are also five times less likely to initiate insulin within the next 12 months.10 Elsewhere, other potential determinants of timely insulin uptake and optimal use have been identified, including an individual’s understanding of diabetes and the risks and benefits of insulin, as well as their engagement with the progression of their condition.11 There is a clear need for interventions that target ‘psychological insulin resistance’, improve understanding of insulin therapy, and support informed decision making among people with T2D.

Recognising the significance of this problem and associated consequences, in 2017, Diabetes Australia formed a new National Diabetes Services Scheme (NDSS) National Priority Area, focused on ‘Starting Insulin in Type 2 Diabetes’. The first task of the new Priority Area was an audit of freely and publicly available online insulin-specific resources for Australians with T2D. The audit identified a lack of resources that were local (i.e. developed for and with Australians), comprehensive (including, for example, practical administration requirements as well as discussion of treatment side-effects and benefits), and specific to insulin use for T2D. Importantly, existing resources largely ignored the psychological barriers to starting insulin and did not acknowledge the role of the individual with T2D in the active decision to start insulin. Finally, it was unclear the extent to which the development of existing resources was informed by, or was acceptable to, the ‘end user’ (i.e. the person with diabetes). A review of published literature identified additional evidence-informed informational resources targeting psychological barriers to insulin and decision aid tool.12-15 However, these were not developed for, nor freely available to, Australians with T2D. Thus, there was a large gap in appropriate resources to support Australians with T2D.

Our aim was to develop a new, evidence-informed resource to address psychological barriers to starting insulin, and support informed and timely decision making about insulin therapy among Australians with T2D. The intention was for the resource to be made freely available via the NDSS website. It was also important that the resource be acceptable to Australians living with T2D. So, using co-design principles, we consulted with six people living with T2D (aged 36–72 years, three women, three managing their T2D with insulin, four born in Australia, two for whom English is a second language) and six health professionals (with expertise in general practice, diabetes education/nursing, and endocrinology), throughout an iterative development and refinement process. Initially, we generated a draft structure, and drew upon published evidence for content, including salient concerns about insulin use among Australians with T2D,9, 16-18 potential enablers of insulin uptake,11 relevant content and features of existing resources previously identified, and principles of effective decision aid tools,14, 19 e.g. balanced information provision and activities to support the identification of personal treatment preferences. This structure was modified and extended following critical feedback received from people with T2D and health professional advisors during independent focus groups. Upon completion of a full content and design draft, health professional advisors undertook a detailed clinical content review and people with T2D provided feedback via a telephone-based semi-structured interview. Following further refinement, the resource underwent review by the NDSS Medical Education and Scientific Advisory Council (MESAC) before being finalised. The resulting content is clinically accurate and written in plain, easy-to-read language (a mean Flesch Reading Ease score of 62, and Flesch–Kincaid Grade Level of 8.3). A summary of the engagement methods and findings are described below.

Adults with T2D participated in a single, face-to-face, 1.5-hour focus group. Following introductions, participants were encouraged to have an open discussion about the types of information they needed when making treatment decisions, to reflect on the utility of existing resources, and on what content they would expect to see in a resource about insulin therapy. The group inspected and discussed a range of existing informational and decision aid resources about insulin or medications for T2D. Preferred resource content as well as design features were identified. Content preferences included information about a) when and why insulin might be beneficial for the management of T2D; b) how and when to administer insulin; c) potential consequences of insulin, including treatment side-effects and benefits, and practical impacts on day-to-day life, and; d) how insulin compares to existing or other medications in terms of effectiveness, convenience, dose, administration, and cost. However, upon viewing two example treatment comparison matrices, people with T2D raised concerns over their complexity, which was mirrored independently by the professional advisors. Regarding acknowledging and addressing barriers to insulin therapy, people with T2D suggested careful phrasing to avoid reinforcing or introducing concerns.

When describing their ‘ideal resource’ design and features, people with T2D preferred a simple, visually appealing layout with dot points, rather than heavy text. They recommended use of quotes from people with T2D and realistic imagery, i.e. not falsely positive. They stated that images of insulin devices would be useful, but may be confronting and should not be included on the front cover. People with T2D preferred that the ideal resource would be available both in hard copy (distributed by health professionals, available to those without the internet), and online (PDF). Similarly, professional advisors stressed the need for hard copies to improve accessibility, and position the booklet for both personal and clinical use.

Following development of a full resource draft, four of the six people with T2D took part in a semi‐structured cognitive debriefing telephone interview, providing detailed feedback on the draft resource content and design. Overall, interviews suggested the resource content and design were acceptable to ‘users’. Minimal, but constructive, critical feedback was received and integrated into the final booklet version. People with T2D suggested, for example, to use the phrase “inject insulin” and avoid the phrase “use insulin” due to negative connotations with illicit drug taking. Regarding design, people with T2D suggested further use of colour, and more engaging images and quotes to better reflect ‘real’ people living with T2D. They also reinforced the need for a print-friendly booklet design. Finally, the resource title was named, “Starting insulin”, which was considered a neutral title (avoiding the term “injections” completely), on the suggestion of both people with diabetes and professional advisors.

The final NDSS ‘Starting Insulin’ booklet is a 24-page English-language resource for Australians with T2D seeking further information about insulin therapy. It is freely accessible for download via the NDSS website: https://www.ndss.com.au/about-diabetes/resources/find-a-resource/starting-insulin-booklet/. Limited hard copies are also available upon request via the NDSS Helpline (1800 637 700). Figure 1 shows the front cover. Table 1 details the range of topics discussed in the booklet, the aims of each booklet section, and content delivery format (e.g., text, peer quotes and images, self-reflection activities).

The booklet addresses and leverages both the barriers to and facilitators of timely insulin uptake, as evidenced in the published literature.11 With regard to addressing barriers to insulin, the booklet content normalises concerns about insulin throughout, encourages readers to reflect on their own beliefs and feelings about insulin, and specifically addresses eleven salient psychological barriers to insulin in the form of ‘frequently asked questions’. Drawing on limited evidence of facilitators of insulin uptake,11 the booklet aims to improve understanding of T2D and the role of insulin, provide a balanced and clinically accurate account of the benefits and side-effects of insulin, encourage personal engagement with diabetes progression, and engage in a decisional balancing task to identify, clarify and examine barriers to and perceived personal benefits of insulin therapy. While the booklet content is informed by, and acceptable to, Australian adults with T2D and health professionals, it does not address all potential barriers to insulin uptake, nor is it universally relevant or accessible to all persons (e.g. people with low literacy levels, people of culturally and linguistically diverse backgrounds). A subsequent scoping project, including literature review and stakeholder engagement, conducted on behalf of the NDSS, identified cultural-specific barriers to insulin initiation and recommended further community consultation to inform the development of tailored resources. Further ‘user testing’ would also be beneficial to identify additional content needs of a larger and more diverse group of Australians with T2D.

We sought to develop a resource that prepares a person with T2D to participate actively in making an informed choice about their treatment; a resource that supplements, rather than replaces, discussion within the consultation. Importantly, the booklet is not a replacement for clinical discussion and counselling. ‘Starting Insulin’ is recommended in the RACGP / Diabetes Australia “Management of type 2 diabetes: A handbook for general practice”.20 We encourage healthcare professionals to consider how they can use the booklet within clinical care to facilitate discussion and support shared decision making. For example, this might include inviting the person with T2D to read through the booklet between appointments, and consider the activities, including decision balancing, for discussion at a subsequent consultation. Ultimately, the way in which the booklet is used depends on the needs of the individual with T2D. Future research needs to explore the broader acceptability of the booklet among health professionals working in T2D, and utility within the clinical setting.

Using co‐design principles, we developed ‘Starting Insulin’. This 24‐page booklet fills an unmet need among adults with T2D for a resource to support informed decision making about insulin initiation. Importantly, it is informed by and acceptable to the ‘end users’. The booklet can be used by people with T2D or health professionals to facilitate clinical discussion and shared, timely decision making. To maximise reach, the booklet is freely available online via NDSS and hard copies can be accessed via the NDSS Helpline (1800 637 700).

Development of ‘Starting Insulin’ was funded by the National Diabetes Services Scheme (NDSS). The NDSS is an initiative of the Australian Government administered by Diabetes Australia. The booklet was developed by Dr Elizabeth Holmes-Truscott and Professor Jane Speight with input from people with T2D and professional expert advisors. The booklet was designed by Nino Soeradinata. We also acknowledge the support of Jasmine Schipp and Victoria Yutronich.

Are your patients missing out on fully subsidised Flash Glucose Monitoring?

It’s been over 12 months since FreeStyle Libre, the only available Flash Glucose Monitoring system, has been fully subsidised under the NDSS for some...