Gut microbiota and type 1 diabetes: a new hope for treatment?

A/Prof Emma Hamilton-Williams’ laboratory currently focuses on developing an immunotherapy for type 1 diabetes as well as understanding the role of the gut microbiota in as a potential trigger for type 1 diabetes. Her laboratory is using nanoparticle technology to deliver an immunotherapy that specifically tolerises the immune cells that cause type 1 diabetes and is working towards a first-in -human trial of this approach. She uses state-of-the-art protein sequencing techniques to probe how disturbances in the gut microbiota of children with type 1 diabetes impacts the function of the gut and the pancreas. She recently currently conducted a clinical trial of a microbiome-targeting dietary supplement aimed at restoring a healthy microbiome and immune tolerance with an ultimate aim of preventing type 1 diabetes. 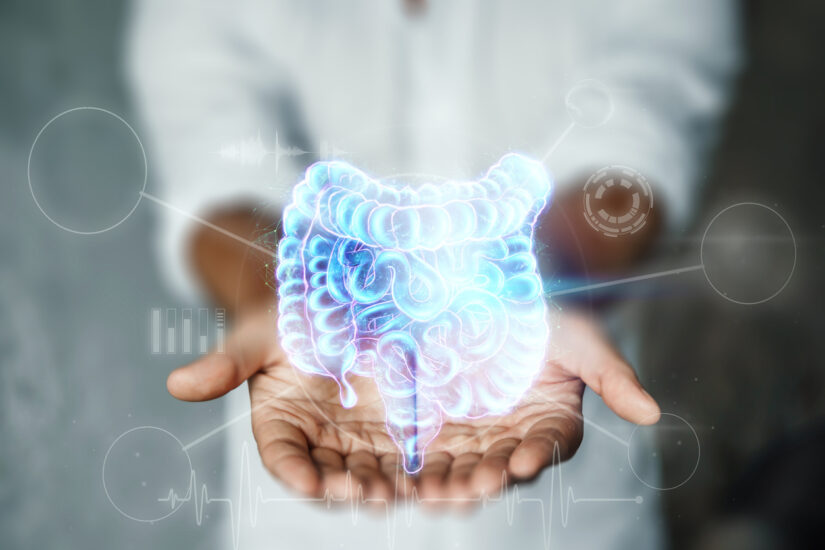 Type 1 diabetes (T1D) is one of the most common chronic conditions in children, with the first evidence of autoimmunity often starting very early at around 1-2 years of age. Incidence of T1D is increasing1, leading to the suggestion that environmental or lifestyle factors are important in the development of this condition. A variety of environmental factors have been investigated for a potential link with T1D, with a focus on factors linked to infancy and the first years of life when autoimmunity begins. Factors that may play a role in increasing or decreasing the risk of T1D include infant diet (breastfeeding and timing and type of first solid foods), birth delivery mode, use of probiotics in infants, viral infections, infant weight gain and stress, and a recent focus on the role of the bacteria found in the gut (the gut microbiota).

What is the gut microbiota and why is it important?

Comprising approximately as many microorganisms as there are cells in the body2, the gut microbiota has been the focus of a tremendous research effort over the past decade, dedicated to understanding host-microbe interactions that may have an important effect on various body systems and processes. In general, the phyla Firmicutes and Bacteroides are the most abundant in the adult microbiota, followed by Actinobacteria and Proteobacteria.3 However, the specific composition of each person’s microbiota is individual and will vary depending on various factors, for example diet, living conditions, and use of medications such as antibiotics. The gut microbiota has many key functions including aiding digestion and fermentation of indigestible fibres, as well as in the development and regulation of the immune system. In addition, there is a growing appreciation for the role of short chain fatty acids (SCFAs), metabolites produced by bacterial fermentation of resistant starches and other dietary fibres4. SCFAs, which include butyrate, acetate and propionate, are an important energy source for the cells that line the colon, but also have a wide range of effects on other parts of the body including an immunomodulatory role.5

Establishment of the microbiota in infants

Prior to birth, the infant gut is thought to be sterile, with the first colonisation of bacteria occurring during birth and then in the early days of life, largely from skin-to-skin contact and during feeding (e.g. from milk derived bacteria). Breastmilk is strongly associated with colonisation with members of the genus Bifidobacterium, via metabolism of complex sugars called human milk oligosaccharides.  For this reason, breastfeeding is the strongest factor influencing the microbiota composition, for as long as breastfeeding continues.6 Birth mode (i.e. vaginal delivery or C-section) is also important, with babies born by C-section having altered transmission of maternal Bacteroides, and altered biodiversity of intestinal bacteria.7 However this effect may not last long into childhood. Other more minor influences on microbiota composition in younger infants (up to 6 months) include maternal BMI, infant probiotic or vitamin D supplementation, geographic location, household siblings and furry pets.6 As the infant’s age, solid food introduction becomes another driver of variation.

Introduction of solid food leads to maturation of the gut microbiota towards a more adult-like composition, including expansion of Firmicutes and Bacteroides phylum members. Importantly, higher abundance of Firmicutes is linked to a healthier diet, high in fibre and carbohydrates, while higher Bacteroides members are linked to Western diet high in fat and animal protein.8 The transition from the infant microbiota to a more adult microbiota is likely to be crucial for longer-term health outcomes as baseline microbiota composition seems to be relatively stable in any individual, returning closely back to a baseline after any short-term perturbations such as the use of antibiotics.

What is the evidence for T1D being affected by the microbiota?

A growing body of research has shown that changes in the gut microbiota are associated with development of islet immunity and subsequent T1D induction. This suggests that the gut microbiota may be a potential target to modulate progression of autoimmunity and prevent beta cell damage, or to improve glycaemic management after diagnosis of T1D.

Both pre-clinical and clinical studies have shown evidence of a link between the gut microbiota and T1D. The non-obese diabetes (NOD) mouse model of T1D, which develop diabetes spontaneously, has been pivotal in demonstrating this9. Altering the gut microbiota of NOD mice via antibiotics or diet causes significant changes in intestinal immunity, gastrointestinal function, and diabetes incidence.10-12 In addition, germ-free NOD mice, who are born and raised in sterile isolators, and therefore lack microorganisms from birth, have a high rate of diabetes and accelerated autoimmunity has been detected in the pancreatic islets13,14.

Humans with islet autoimmunity have an altered intestinal microbiota, with a range of specific types of bacteria having been associated with increased risk of T1D.15,16 Increases in taxa including Bacteroides17, Clostridium perfringens and Bacillus cereus have been linked to increased predisposition to T1D. Conversely, predisposition to T1D has also been linked to decreased levels of Bifidobacteria18, Akkermansia19 and Faecalibacterium prausnitzii.19 Other studies have shown that children with positive islet-antibodies have a higher ratio of Bacteroidetes to Firmicutes, as well as lower overall diversity within their bacterial community. A recent systematic review of 26 studies also determined that people with T1D had decreased alpha diversity, however no consistent conclusion was reached in terms of specific taxa involved.20

A deficiency of SCFA-producing bacteria has also been shown in children with multiple autoantibodies or new-onset T1D disease.18,21 For example, the very large, longitudinal study called ‘The Environmental Determinants of Diabetes in the Young (TEDDY)’ showed that bacterial genes for fermentation of fibre into SCFA were significantly reduced in children  who went on to develop islet autoimmunity or T1D.22 This finding was also replicated more recently, by Huang et al, who showed lower levels of acetate and butyrate in the stool of children (aged 6-18 years) with newly diagnosed T1D, compared to age and sex matched healthy controls.23 Strengthening this link, in mice, delivery of a high microbial SCFA diet yielded complete protection from diabetes, and improved levels of regulatory T cells24. This suggests that bacteria able to ferment fibre are reduced in T1D. Possible reasons for this could be poor colonisation with these bacteria due to reduced exposure to these bacteria, differences in fibre intake in the diet or maybe due to genetic differences or other environmental exposures that alter the gut environment to favour different bacterial species.

Is the early life microbiota important in T1D risk?

Early life is a key period of gut microbiota development. Bifidobacterium have been repeatedly linked to T1D development, which may be linked to breastfeeding. A large cohort study conducted in Denmark and Norway found that children who were never breastfed had a twofold increased risk of T1D compared with those who were breastfed.25 In addition, the TEDDY study showed that reductions in Bifidobacterium abundance were associated with the development of islet autoimmunity and T1D.22 However, infants in Finland who have a high-risk of T1D are still breastfed at a similar rate to infants in neighbouring countries with a lower T1D incidence but still have lower Bifidobacterium abundance22. This suggests that reduced Bifidobacterium in T1D may not be due to lower breastfeeding rates but to other as yet unidentified factors.

A study of infants at risk of T1D in Germany investigated associations with early infant diet and risk of future development of islet autoantibodies.26 They found that in the infants at 6 months of age, those with the highest risk of progression to islet autoantibodies were linked to colonisation with Bacteroides taxa and had the most complex diet of the participants, including consuming 5 or more different food types. The children with the lower risk were either exclusively breastfeeding with a gut microbiota dominated by Bifidobacterium or were on a transitional diet including breast milk or formula with a few solid food types and this was linked to Firmicutes and Akkermansia colonisation. This is in line with another study that linked the timing of solid food introduction with T1D risk (introduction of solids earlier than 4 months of age increased risk).27 This suggests that early infant diet, particularly rate and type of solid food introduction may be linked to establishment of gut microbiota colonisation patterns and future T1D risk.

Targeting T1D with the microbiota

With this increasing body of evidence for the role of the gut microbiota in T1D development, focus has turned to ways to target the microbiota to reduce T1D symptoms or development. Microbiota-targeted therapies may be promising at multiple stages of disease: modulating progression of autoimmunity and beta cell damage, or improving glycaemic management in T1D.

There are multiple methods available with which to target the gut microbiota that may lead to a safe, low risk therapy. This may include attempting to replenish levels of beneficial bacteria, via the use of probiotics or faecal microbiota transplantation. Multiple clinical trials, including those using Bifidobacterium products in infants for T1D prevention, are currently underway to investigate this (e.g. clinical trial NCT04769037). In mice, oral administration of the combination probiotic VSL#3 protected from diabetes.28 Faecal microbiota transplant has also shown beneficial results in mice29, and more recently in humans.30 Alternatively, prebiotics, which are food for these beneficial bacteria, could be used to expand existing good bacteria via a dietary supplement.31 Finally, we could attempt to directly supplement with beneficial metabolites usually produced by the beneficial bacteria (e.g. SCFAs such as butyrate or acetate). Our laboratory recently completed a study where 25 adults with longstanding T1D consumed a resistant starch dietary supplement for 6 weeks, with stool samples assessed to determine gut microbiome composition at baseline, at 6 weeks, and a follow up at 12 weeks.32 Individual participants had a variable microbiota response to the diet, but those that had increased production of the SCFA butyrate and had elevated Bifidobacterium genus members had better overall glycaemic management. However, more research needs to be done to understand how these therapies would work in a larger number of people, who will have differences in their microbiota composition.

Many studies have now shown close links between altered gut microbiota composition or function and T1D. Further research is required to determine the specific bacterial species or metabolites that need to be targeted for clinical improvement in the management of human T1D, as well as to identify the best therapeutic modalities and optimal timing by which to target the gut microbiota in the pathogenesis of T1D.