Director of the Heart Failure Programme at Barwon Health

Traditionally, we have adopted a glucocentric approach to the management of diabetes and focused primarily on glycaemic management. Large studies have shown that optimal glucose management reduces the risk of microvascular complications (retinopathy and nephropathy), but the benefits on macrovascular events (myocardial infarction, stroke) have been less pronounced,1 although long-term follow-up studies have shown a small decrease in major cardiovascular (CV) events.2 This is disappointing, as most of the morbidity and mortality associated with type 2 diabetes (T2D) is due to CV events.3, 4 It has become clear that optimal management of blood pressure and lipids, particularly with angiotensin-converting-enzyme inhibitors (ACEI) or angiotensin II receptor blockers (ARB) and statins, has reduced the risk of CV events and renal dysfunction in people with T2D,5–7. Cardiorenal protection is now seen to be as important.8 Until recently, the agents we have used to manage hyperglycaemia in diabetes have not had any impact on reducing CV or renal events, so the advent of the sodium-dependent glucose cotransporters inhibitors (SGLT2i) and glucagon-like peptide-1 agonists (GPL1) have been met with great enthusiasm.

It is essential to educate people about good genital hygiene when considering SGLT2i treatment to reduce the risk of genital mycotic infection,8 and to instruct them to discuss transient treatment interruption in the setting of systemic illness or surgery/procedures where fasting is required (e.g. angiography, colonoscopy, etc) to avoid euglycemic diabetic ketoacidosis (DKA).8 A reduction in diuretic dose also needs to be considered if individuals are on thiazide or loop diuretics (as the SGLT2i’s have a weak diuretic effect).8 Hospitalisation for HF is common in T2D and is associated with considerable morbidity and mortality, in addition to expense to the health care system and socially.8, 12–15 The appropriate use of SGLT2i’s may reduce this risk in people with T2D with established CV disease and should be increasingly be used in these individuals.8

This article is commissioned by AstraZeneca. 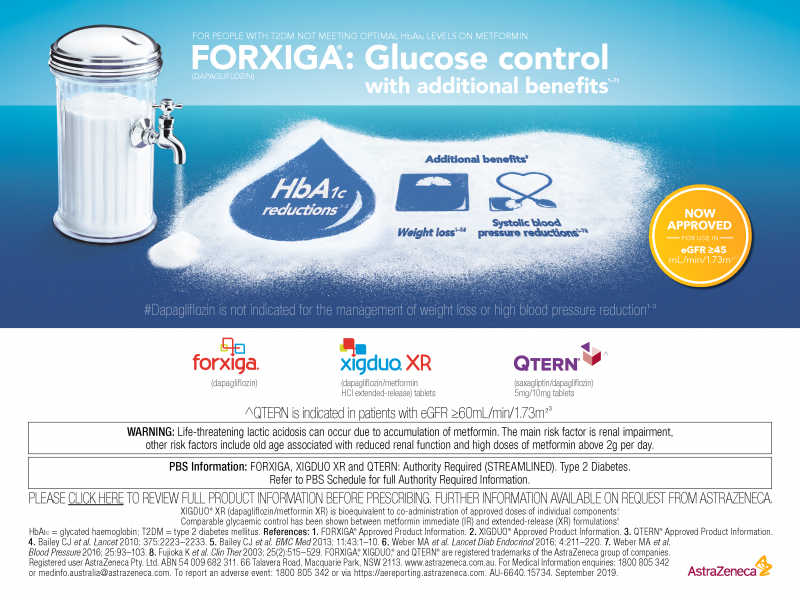 Management of hyperglycaemia in type 2 diabetes, 2018.

A consensus report by the American Diabetes Association (ADA) and the European Association for the Study of Diabetes (EASD).